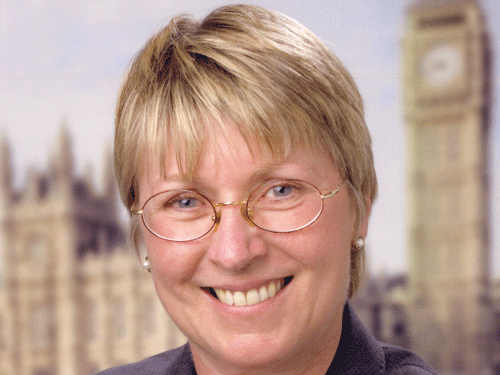 Patsy Calton was the Liberal Democrat MP for Cheadle from 2001 to 2005. In 2001 she overturned a Conservative majority to win the seat from the sitting MP. Patsy’s majority was 33. In the 2005 election she held her seat with a majority of 4,020. She had stood previously as a parliamentary candidate in 1992 and 1997. She was the Party’s Spokesperson on Northern Ireland and Chair of the All Party Group on Breast Cancer,

Patsy had been a councillor in Stockport and became Deputy Leader of the  Council. She was a teacher and Head of Department in a local secondary school.

Shortly after the 1997 election, Patsy was diagnosed with breast cancer and underwent a double mastectomy and recovered from the disease. Determined to make a difference, she spoke about her illness and encouraged other women to undergo mammograms. To raise money for Macmillan Nurses, Patsy ran the London Marathon four times.

Unfortunately, cancer returned in February 2005 and she was too unwell to campaign. She was victorious in the election and was sworn in by the Speaker just four weeks before her death.

Breakthrough Breast Cancer established an award in her name, to recognise exceptional  achievement by Parliamentarians in the field of breast cancer.

Awardees may be exceptional councillors, party members or Parliamentarians, who have achieved more for their constituents, the underprivileged in society, perhaps even taken on government and changed things for the better.

If you know of an exceptional woman, either in your own local party, region or nationally that you feel is deserving of such an award, please nominate them ahead of the party's annual autumn conference.  The winner is decided by an independent judge appointed by the Lib Dem Women executive.