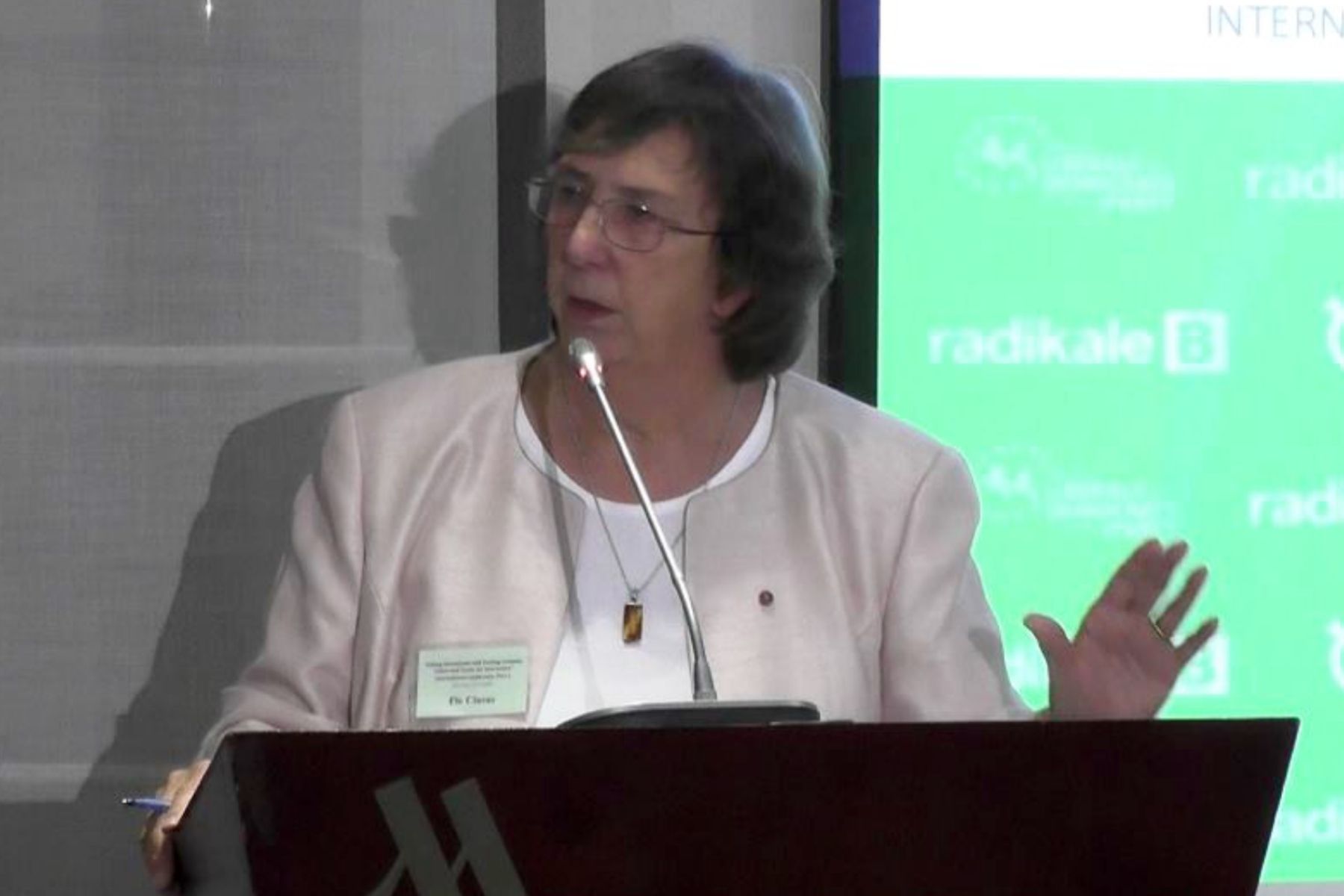 Flo Clucas, pictured speaking for ALDE in Moscow in 2009, opens our new series profiling inspiring Lib Dem Women. A councillor in Liverpool for 26 years, Flo was deputy leader of Liverpool council and led the fight for significant EU funding which helped transform the city, later chairing the Objective 1 committee. She was appointed OBE in 2005 for services to the community in Merseyside. After 'retiring' to Cheltenham, she found herself on the Lib Dem-run council there two years later, where she continues to serve the residents of Swindon Village and as the cabinet member for healthy lifestyles.

An eight-time parliamentary candidate, including a 1997 by-election in Wirral South, and an EU election candidate, Flo has also held a huge number of roles in the party including agent, constituency chair, regional chair, Liberal Democrat Women chair, chair of ALDE Women's Organisation and ALDE's Committee of the regions.

When and why did you join the Liberal Democrats?

I joined the SDP on its launch day. Being in Liverpool at that time was a lesson in politics: the Militant left, how they bullied ordinary Council employees, were interested only in making political points at the expense of ordinary citizens. I wanted to change things. Marches were fine, but they didn’t get the job done. Being active in politics seemed the right thing to do. The Liberal Democrats was born from the marriage of the SDP and Liberal Party and I’ve been a member since its inception.

Who made you feel welcome or got you involved? How did you first become active?

A lady by name Sue Reid. She lived not far from me and we worked together on building the Party from scratch! She got me delivering leaflets and persuaded me to stand for election. We are still the greatest of friends. My oldest son, pushed me to become active. He was then 11. He phoned the SDP on the day it was launched and passed the phone to me, to join. He thought I should and I did! 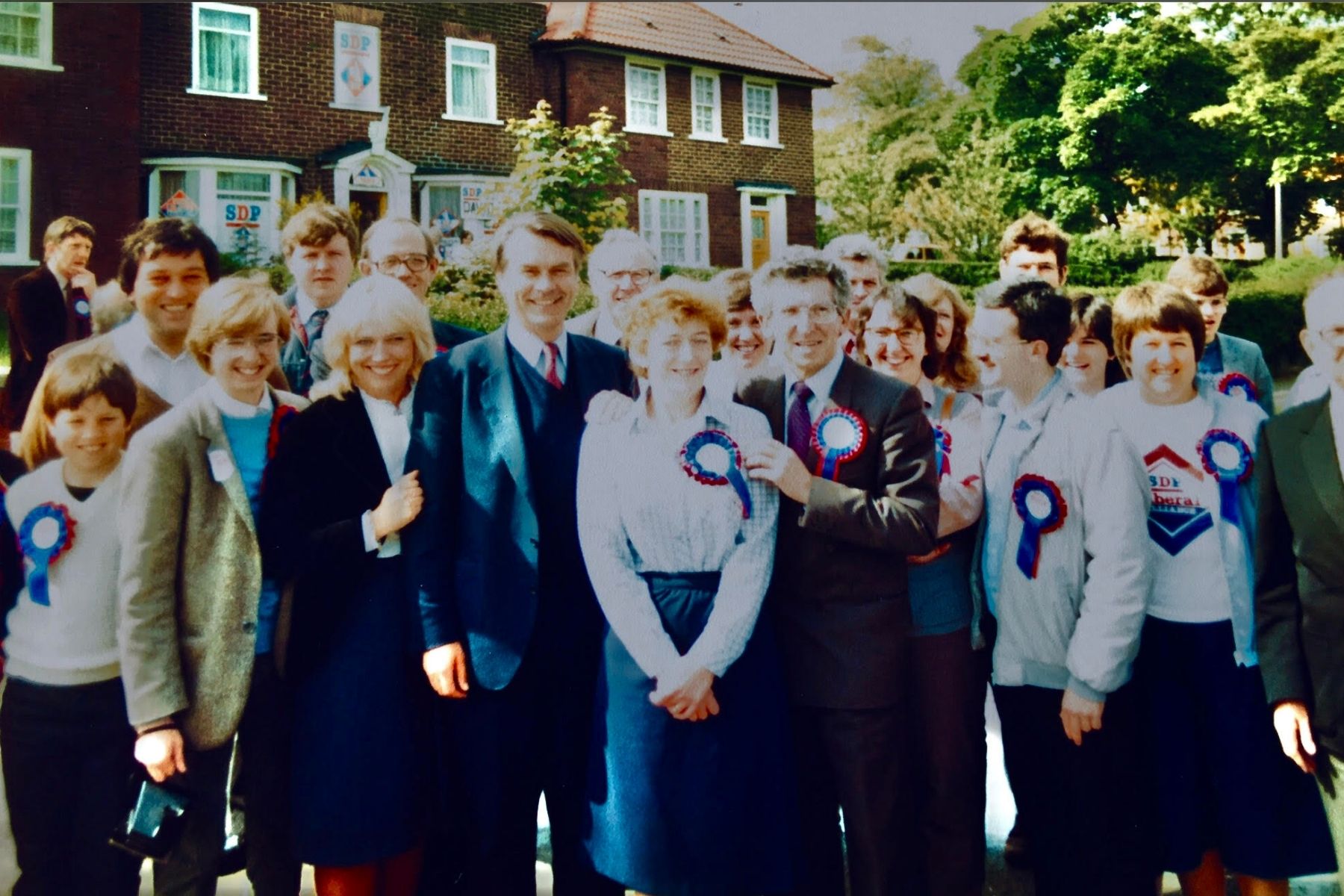 I’m peeking over Eric Ogden’s shoulder and Sue Reid is to my right.

How did you first come to stand for office?

The SDP Exec decided to put up candidates across areas of Liverpool. My first SDP/Liberal Alliance battle was in a Militant held seat. Interesting! It taught me never to take appearances, or areas for granted in the way people vote!

Who are your heroes?

Shirley Williams, Charles Kennedy, Paddy Ashdown, Daisy Cooper and two women from the Victorian era who changed the lives of communities, women and girls: Kitty Wilkinson and Josephine Butler. They were just amazing to achieve what they did in the period in which they lived.

What is the best piece of advice you’ve been given?

Don’t think that just because you won an election, you are above everyone else. You’re not. You are there to represent, not dictate and that means being honest with those who elected you.

What is the achievement which gives you most satisfaction?

Gosh that is a tough one! As a councillor, having a statue erected in St George’s Hall to commemorate Kitty Wilkinson. It was the first statue of a woman in a building where men were commemorated. Raising the money, deciding in the sculptor, getting consent as it’s a Grade 1 listed building and then commissioning the work. The Blitz Memorial Statue is another. A third would be the post tsunami charity I did for Sri Lanka and the work we did with women and girls there.

How do you keep going when times are tough?

That is a really difficult question. The honest answer is John. He picks me up when things are bad. He cooks dinner, we sit and chat or watch an old film, oftentimes a Western. On one occasion when things were really, really tough and I was thinking of stopping all together, he took me away for a few days. We ended up in Cannes!

My Twitter feed was photoshopped and recirculated and that taught me a lesson. Social media is everyone’s tool, not just mine. It can be used, but also abused. I’m very careful now. 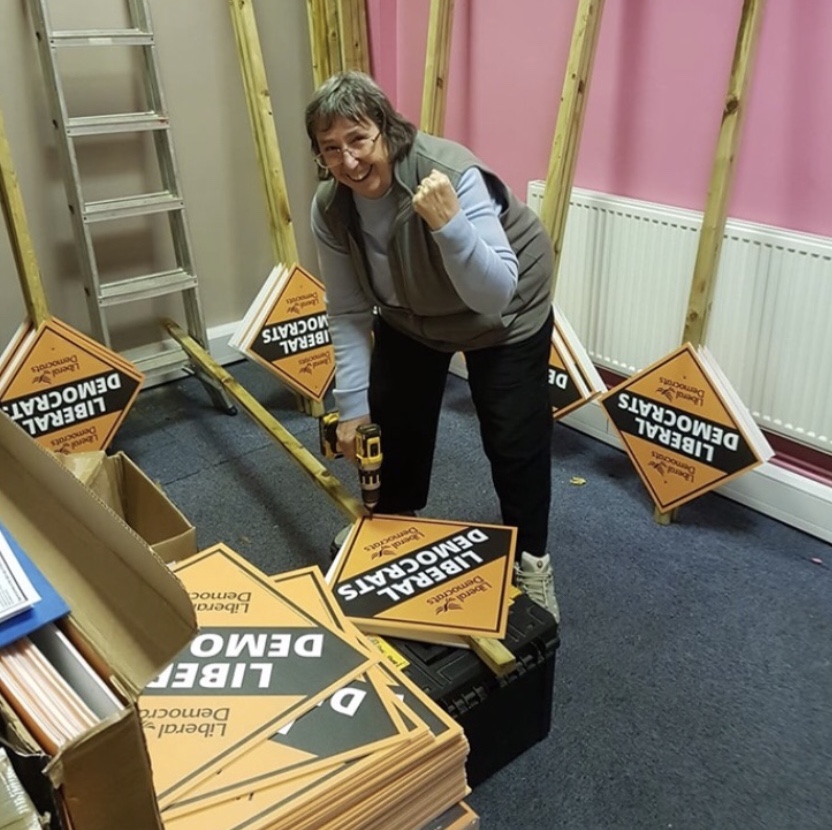 What do you know now which you wish you had known when you started out?

What do the Liberal Democrats have to offer women from a policy point of view?

Women have to be able to believe that we as Liberal Democrats want women to be active, involved and succeed. Our policies have to be tailored to that, if we want women to join and stand. We can’t just say this. The Party has to create it, build it, sustain it and believe it.

How do we get more women to stand?

As a Party we have to look at why women feel reluctant to put themselves forward and act to correct it. This is a time for equity, not just equality. That means support including financial support, opportunity and a voice that can be heard.

Who is the coolest person you’ve got to meet?

Has to be Paul McCartney. He is amazing. I have been involved with the Liverpool Institute for Performing Arts since about 1990. He has been our champion. He wants to make a better future for creative young people and children in Liverpool. He doesn’t just say the words. He makes things happen.

Has anybody left you starstruck?

Starstruck. An interesting word. Let me translate that as ‘in awe’. There is one. Shirley. Shirley Williams. What a campaigner! She has the ability to reach out to people in a way I have never seen anyone else do. I’ve seen people run across a busy road to shake her hand and in five minutes it’s as though they have known each other for ever! She also taught me something that I would never have expected to hear, that even a seasoned campaigner like her can be nervous when speaking in public. Controlling and using the nervousness is key.

How can we encourage more women to engage in politics - and even better, join the Lib Dems?

Women have to believe: that politics is for them; that they won’t be sidelined; that when they speak, they are listened to and that their words aren’t ignored. For the Liberal Democrats women have to be visible - thank you to our terrific MPs! - at national and local level too both in the Party and as elected representatives.

What is a good day?

Every day! Even when things go badly, and sometimes they do, I can come home and talk it through. There is always a listening ear, an occasional nod, some good advice and a shared glass of French wine.

What would you say to women thinking of standing?

Go for it! Make your voice heard. If you want to talk through standing, give me a call. Go girls!